Courts May Not Dictate to Agencies the Procedure They Must Use to Change the Interpretation of Their Regulations; Mortgage Loan Officers Do Not Qualify for the FLSA Administrative Exemption.

The Fair Labor Standards Act of 1938 (FLSA)[i] “establishe[s] a minimum wage and overtime compensation for each hour worked in excess of 40 hours in each workweek.”[ii] Certain employees, such as those “employed in a bona fide executive, administrative, or professional capacity…or in the capacity of outside salesman…” are exempt from such requirements under the “administrative” exemption.[iii]

The FLSA confers on the Secretary of the United States Department of Labor (DOL) the authority to “defin[e] and delimit[t]” which employees are administratively exempt.[iv]

The Administrative Procedure Act (APA) sets forth the procedures that federal administrative agencies use to make “rules,”[v] in a process known as “rule making.”[vi] There are two types of rules: “legislative rules,” which issue through a notice-and-comment process and which have the “force and effect of law”;[vii] and “interpretive rules,” which simply “advise the public of the agency’s construction of the statutes and rules which it administers”[viii] but which do not require a notice-and-comment process – and correspondingly “do not have the force and effect of law and are not accorded that weight in the adjudicatory process.”[ix]

In 1999 and 2001, the DOL’s Wage and Hour Division issued opinion letters that mortgage-loan officers were not administratively exempt and therefore had to be paid minimum wage and overtime.[x] In 2004, the Secretary of Labor first promulgated its current regulations regarding the FLSA administrative exemption.

That same year, the Mortgage Bankers Association (MBA), a national trade association for real estate finance companies, requested an opinion letter to interpret the new regulations. In 2006, the DOL issued a letter that the mortgage-loan officers did, in fact, fall within the administrative exemption.[xi]

However, in 2010 the Wage and Hour Division reviewed the provisions of the 2004 regulations and the judicial decisions that had addressed the administrative exemption and concluded that because mortgage-loan officers “have a primary duty of making sales for their employers” they did not qualify for the administrative exemption.[xii] Accordingly, the DOL withdrew its 2006 opinion letter.

Relying on Paralyzed Veterans of Am. v. D.C. Arena L.P., 117 F3d 579 (D.C. Cir. 1997) and its progeny, Alaska Prof. Hunters Ass’n v. FAA, 177 F.3d 1030 (D.C. Cir. 1999), the MBA argued that the Deputy Administrator should have used the notice-and-comment procedure when issuing a new interpretation of a regulation that deviated significantly from the interpretation immediately preceding it.

The district court granted partial summary judgment in favor of the DOL/Deputy Administrator and against the MBA, questioning outright whether Paralyzed Veterans/Alaska Professional Hunters Ass’n still was even good law before deciding that it still was controlling authority.[xiii]

Despite its finding vis-à-vis Paralyzed Veterans, the district court held that the 2010 AI did not conflict with the 2004 regulations, which provide in relevant part, “Employees in the financial services industry generally meet the duties requirements for the administrative exemption… However, an employee whose primary duty is selling financial products does not qualify for the administrative exemption.”[xiv]

Ultimately, the district court decided that, because the 2010 AI was not inconsistent with the 2004 regulations, “the 2010 AI is not arbitrary, capricious, an abuse of discretion, or otherwise not in accordance with the law.”[xv] On appeal,[xvi] the D.C. Circuit narrowed the analysis to the following issue: “When an agency has given its regulation a definitive interpretation, and later significantly revises that interpretation, the agency has in effect amended its rule, something it may not accomplish [under the APA] without notice and comment.”[xvii]

The circuit court held that the only issue on appeal was whether the MBA had relied on the DOL’s 2006 interpretation, and since reliance was not part of the Paralyzed Veterans analysis and because the DOL conceded that the 2010 AI conflicted with the 2006 Opinion Letter, the 2010 AI therefore had to be vacated.[xviii] 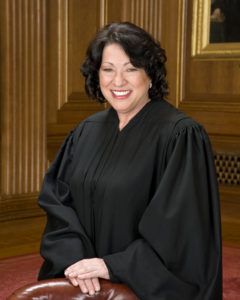 Justice Sotomayor, writing the opinion of the Court, held that the Paralyzed Veterans doctrine “is contrary to the clear text of the APA’s rulemaking provisions, and it improperly imposes on agencies an obligation beyond the ‘maximum procedural requirements’ specified in the APA.’”[xix]

Specifically, Justice Sotomayor highlighted that the D.C. Circuit had improperly focused exclusively on Section 1 of the APA, which defines what a rulemaking is, rather than Section 4(b)(A), which sets forth the procedures an agency must use when engaging in rulemaking and which specifies that interpretive rules need not meet the notice-and-comment requirement of legislative rules.[xx]

Moreover, Justice Sotomayor emphasized that determining agencies’ procedural obligations falls under the purview of Congress or of the agencies themselves and is not a power of the courts.[xxi]

The Perez court thus upheld that mortgage-loan officers, once again, do not qualify for the administrative exemption from the FLSA’s minimum wage and overtime requirements.

Justices Alito, Scalia, and Thomas all wrote concurring opinions, agreeing with the holding that the Paralyzed Veterans doctrine is inconsistent with the APA and therefore must be rejected.

If you would like to speak to a California labor & employment Attorney, about wrongful termination, sexual harassment in the work place, or other types of issues, please contact Feldman Browne, APC now to discuss your potential case. If you’ve never met with an attorney before, don’t be intimidated, here’s what you can expect when meeting with a lawyer for the first time. First consultations are free.